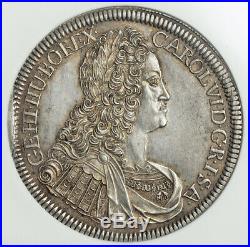 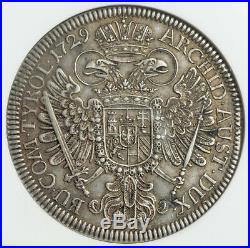 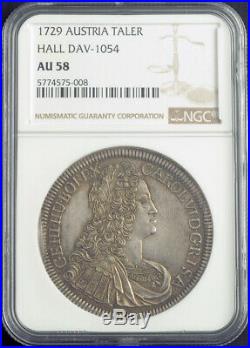 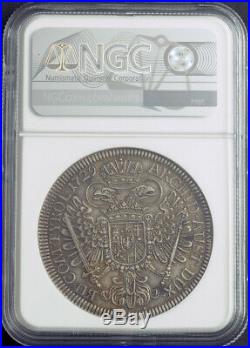 1729, Austria, Emperor Charles VI. Beautiful Silver Thaler Coin. Mint Year: 1729 Denomination: Thaler Mint Place: Hall (Tyrol) Reference: Davenport 1037, KM-1579.2. Certified and graded by NGC as AU-58! Diameter: 43mm Weight: 28.6gm Material: Silver. Obverse: Laureate, draped and armored bust of the young Charles VI to right, wearing Order of the Golden Fleece on a large chain. Reverse: Crown above double headed eagle with sword and sceptre in claws, crowned shield at chest including composite arms (castle – Spain, double cross – Hungary, lion – Bohemia, stripes – Burgundy and at the centre eagle – Hall), within order chain. Legend: ARCHID : AUST : DUX. (October 1, 1685 – October 20, 1738) was Holy Roman Emperor, King of Bohemia as Karel II. And Hungary from 1711 to 1738. From 1703 to 1711 he was an active claimant to the throne of Spain as Charles III. Charles was born in Vienna, the second son of the Emperor Leopold I and of his third wife, Princess Eleonore-Magdalena of Palatine-Neuburg. He was given the baptismal names. Karl Franz Joseph Wenceslau Balthasar Johann Anton Ignatius. His tutor was Prince Anton Florian of Liechtenstein. Charles was the contracted heir of the Spanish Habsburgs. When Charles II of Spain made Philip V his heir, Louis XIV violated the contract. The dispute for the crown of Spain led to the War of the Spanish Succession. He succeeded immediately as King of Hungary and King of Bohemia. Later that year he was elected Holy Roman Emperor in Frankfurt. Although Charles seems to have been clumsy in political affairs, the Austrian monarchy reached its widest expansion during his reign. His superior army was defeated by Bosnians in year 1737 in Battle of Banja Luka. He married Elisabeth, eldest daughter of Louis Rudolph, Duke of Brunswick-LÃÆ’ÃâÃâ Ã¢â¬â¢ÃÆ’Ã¢â¬Å¡ÃâÃÂ¼neburg. At the time of his death, his only surviving children were Maria Theresa and Maria Anna, so he had no living male heirs – a situation he had guarded against in the Pragmatic Sanction of 1713, which stated that his realm could not be divided and allowed that daughters also could inherit the throne from their fathers. When he died, the War of the Austrian Succession took place, but in the end the Pragmatic Sanction held up and his daughter succeeded him as Queen of Hungary and Bohemia and Archduchess of Austria. However, being a female, she was not elected Holy Roman Empress. Instead, Charles VII was elected. However, after Charles VII’s reign, Maria Theresa’s husband Francis III Stephen, Duke of Lorraine, was elected, ensuring that the Empire would continue in the Habsburg line. Probably as a consequence of his years in Spain, he introduced the Spanish court ceremonial. In Vienna and built the Spanish Riding School. (“chancellory of the state”) and the National Library were constructed during his reign and the Michaeler tract added to the. Much was designed in baroque style in Vienna during Charles’ reign. He also had musical ambitions. Taught as a boy by Johann Joseph Fux, he composed, played the harpsichord, and now and then conducted the court’s band. There is some evidence that Charles’ death was caused by consuming a meal of death cap mushrooms. Karl succeeded more as a musician than as a statesman. He composed, played the harpsichord, and conducted the court band. Unfortunately, he performed those functions when he should have been leading the nation. The item “1729, Austria, Emperor Charles VI. Beautiful Silver Thaler Coin. Hall! NGC AU58″ is in sale since Monday, May 11, 2020. This item is in the category “Coins & Paper Money\Coins\ World\Europe\Austria”. The seller is “coinworldtv” and is located in Wien. This item can be shipped worldwide.