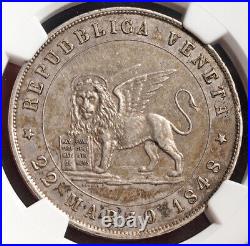 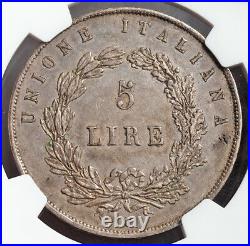 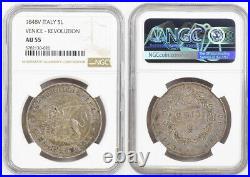 1848, Venice (Provisional Government). Beautiful Silver 5 Lire Coin. Mint Year: 1848 Denomination: 5 Lire Mint Place: Venice (V) Mintage: 11,000 pcs. Certified and graded by NGC as AU-55! Reference: Davenport 207, Pagani 177, Montenegro 90, C#186, KM-804. 900 Weight: 24.98gm Diameter: 37mm. Obverse: Nimbate Lion of Saint Mark, head facing, right paw supporting inscribed Book of Gospels. Book Inscription: PAX TIBI MARCE EVANGELISTA MEUS. Peace to you, Mark, my Evangelist.. Legend: REPUBLICA VENETA 22 MARZO 1848 Reverse: Denomination (5 LIRE) within wreath. Mint initial (V) below. Edge Legend: DIO BENEDITE L’ITALIA. The legend states that when Mark the Evangelist went to the lagoon where Venice would later be founded, an angel came and said: Pax tibi, Marce, evangelista meus. Hic requiescet corpus tuum. Peace to you, Mark, my Evangelist… Here will rest your body. The first part is depicted as the note in the book shown opened by the lion of St Mark’s Basilica. In 1814 the viceroy Eugene, to save Lombardy, retroceded Venetia to Austria. The news of the Revolution of Vienna and the Milanese Insurrection , in 1848, found a ready echo in Venice, where the Austrian garrison, the Italians excepted, departed after peacefully capitulating. Daniele Manin was at the head of the provisional government, which the cities of the mainland accepted; they soon after joined the union with Piedmont under Carlo Alberto, as had already been done by Venice, and in a few days news arrived of the cessation of hostilities between Piedmont and Austria. The Venetian republic was then re-established (11 August, 1848). The Neapolitan general Guglielmo Pepe commanded the Venetian troops against the Austrians who came to retake the city. It was besieged in October; on 24 August, 1849, after a bombardment of twenty-four days, it surrendered. In 1866 Austria ceded Venice to Napoleon III, who gave it to the Kingdom of Italy. The item “1848, Venice (Provisional Government). Beautiful Silver 5 Lire Coin. NGC AU-55″ is in sale since Monday, August 30, 2021. This item is in the category “Coins & Paper Money\Coins\ World\Europe\Italy, San Marino, Vatican\Italian States (up to 1861)”. The seller is “coinworldtv” and is located in Wien. This item can be shipped worldwide.