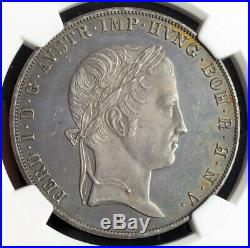 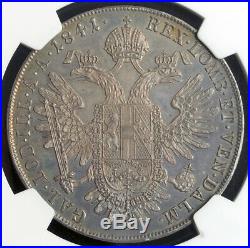 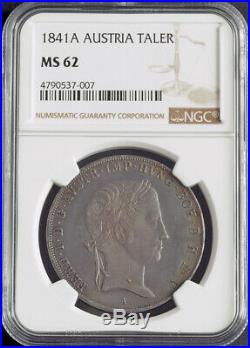 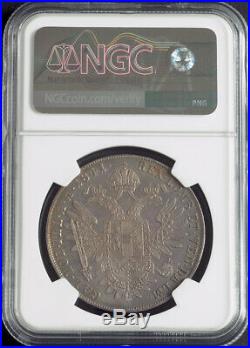 1841, Austria, Emperor Ferdinand I. Beautiful Silver Thaler Coin. Mint Year: 1841 Reference: KM-2240. Mint Place: Vienna (A) Condition. Certified and graded by NGC as MS-62! Denomination: Thaler Diameter: 38.4mm Material: Silver Weight: 28gm. Obverse : Laureate head of Ferdinand right. Mint initial (A) of Vienna below. Reverse : Imperial double headed weagle with coat of arms at chest and crown above. The Austrian Empire Austrian German. Was a modern era successor empire centered on what is today’s Austria and which officially lasted from 1804 to 1867. Austrian Empire was a multinational realm and one of the world’s great powers at the time. The Austrian Empire was geographically the second largest country in Europe after the Russian Empire 621,538 square kilometres (239,977 sq mi), the second most populous after the Russian Empire, and the largest and strongest country in the German Confederation. Since its establishment until 1806, some lands in the Austrian Empire were also included in the Holy Roman Empire. It was followed by the Empire of Austria-Hungary, whose proclamation was a diplomatic move that elevated Hungary’s status within the Austrian Empire as a result of the Austro-Hungarian Compromise of 1867. The Austro-Hungarian Empire (1867 to 1918) was itself dissolved by the victors at the end of World War I and broken into separate new states. The term “Austrian Empire” is also used for the Habsburg possessions before 1804, which had no official collective name, although Austria is more frequent. Ferdinand I, Emperor of Austria, King of Hungary and Bohemia (April 19, 1793 June 29, 1875) succeeded his father (Franz II Holy Roman Emperor/Franz I of Austria) as emperor and king (as Ferdinand V) in 1835. He chose to abdicate, after a series of revolts in 1848. He was also King of Lombardy-Venetia. Ferdinand has been depicted as feeble-minded and incapable of ruling, but although he was epileptic and certainly not intelligent, he kept a coherent and legible diary and has even been said to have a sharp wit. The up to twenty seizures he had per day, though, severely restricted his ability to rule with any effectiveness. Though he was not declared incapacitated, a regent’s council (Archduke Luis, Count Kolowrat and Prince Metternich) steered the government. He is famous for his one coherent command: when his cook told him he could not have apricot dumplings because they were out of season, he said I’m the Emperor, and I want dumplings! Ich bin der Kaiser und ich will Knödel. As the revolutionaries of 1848 were marching on the palace, he is supposed to have asked Metternich for an explanation. When Metternich answered that they were making a revolution, Ferdinand is supposed to have said But are they allowed to do that? Ja, dürfen’s denn des? He was convinced by Felix zu Schwarzenberg to abdicate in favour of his nephew, Franz Joseph (the next in line was Ferdinand’s younger brother Franz Karl, but he was persuaded to waive his succession rights in favour of his son) who would occupy the Austrian throne for the next sixty-eight years. Ferdinand recorded the events in his diary : The affair ended with the new Emperor kneeling before his old Emperor and Lord, that is to say, me, and asking for a blessing, which I gave him, laying both hands on his head and making the sign of the Holy Cross… Then I embraced him and kissed our new master, and then we went to our room. Afterward I and my dear wife heard Holy Mass… After that I and my dear wife packed our bags. Ferdinand was the last King of Bohemia to be crowned as such. Due to his sympathy with Bohemia (where he spent the rest of his life in Prague Castle) he was given the Czech nickname “Ferdinand V, the Good”. In Austria, Ferdinand was similarly nicknamed “Ferdinand der Gütige” (Ferdinand the Benign), but also ridiculed as “Gütinand der Fertige” (Goodinand the Finished). He is interred in tomb number 62 in the Imperial Crypt in Vienna. The item “1841, Austria, Emperor Ferdinand I. Beautiful Silver Thaler Coin. NGC MS-62″ is in sale since Monday, May 11, 2020. This item is in the category “Coins & Paper Money\Coins\ World\Europe\Italy, San Marino, Vatican\Italian States (up to 1861)”. The seller is “coinworldtv” and is located in Wien. This item can be shipped worldwide.