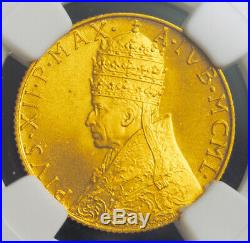 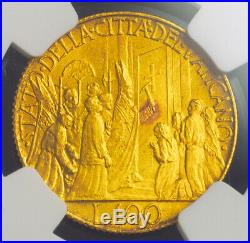 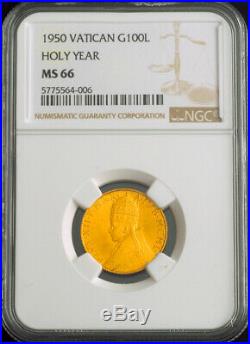 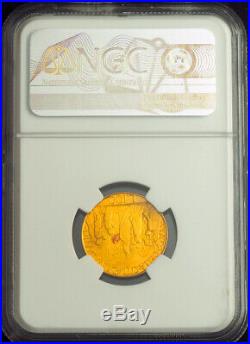 1950, Vatican, Pius XII. Beautiful Gold 100 Lire Coin. Mint Year: 1950 Mint Place: Rome Reference: KM-48. Mintage: 20,000 pcs. Denominations: 100 Lire – Holy Year of 1950! Certified and graded by NGC as MS-66! 900 Weight: 5.19gm. In the Catholic Church, a jubilee is a special year of remission of sins and universal pardon. In Leviticus, a jubilee year Hebrew. Yl is mentioned to occur every 50th year, during which slaves and prisoners would be freed, debts would be forgiven and the mercies of God would be particularly manifest. In Western Christianity, the tradition dates to 1300, when Pope Boniface VIII convoked a holy year, following which ordinary jubilees have generally been celebrated every 25 or 50 years, with extraordinary jubilees in addition depending on need. Catholic jubilees, particularly in the Latin Church, generally involve pilgrimage to a sacred site, normally the city of Rome. The Catholic Church declared the Extraordinary Jubilee of Mercy for 20152016. Pope Pius XII Italian. , born Eugenio Maria Giuseppe Giovanni Pacelli Italian pronunciation. [eudnjo maria duzppe dovanni patlli]. 2 March 1876 9 October 1958, was head of the Catholic Church from 2 March 1939 to his death. Before his election to the papacy, he served as secretary of the Department of Extraordinary Ecclesiastical Affairs, papal nuncio to Germany, and Cardinal Secretary of State, in which capacity he worked to conclude treaties with European and Latin American nations, most notably the. While the Vatican was officially neutral during World War II, Pius XII maintained links to the German Resistance, used diplomacy to aid the victims of the war and lobby for peace, and spoke out against race-based murders and other atrocities. And his leadership of the Catholic Church during the war remain the subject of controversyincluding allegations of public silence and inaction about the fate of the Jews. After the war, he advocated peace and reconciliation, including lenient policies towards former Axisand Axis-satellite nations. He was also a staunch opponent of Communism and of the Italian Communist Party. During his papacy, the Church issued the Decree against Communism, declaring that Catholics who profess Communist doctrine are to be excommunicated as apostates from the Christian faith. In turn, the Church experienced severe persecution and mass deportations of Catholic clergy in the Eastern Bloc. Papal infallibility with the dogma of the Assumption of Mary in his Apostolic constitution. His magisterium includes almost 1,000 addresses and radio broadcasts. His forty-one encyclicals include. The Church as the Body of Christ. On liturgy reform; and. In which he instructed theologians to adhere to episcopal teaching and allowed that the human body might have evolved from earlier forms. He eliminated the Italian majority in the College of Cardinals in 1946. After his 1958 death, he was succeeded by Pope John XXIII. In the process toward sainthood, his cause for canonization was opened on 18 November 1965 by Pope Paul VIduring the final session of the Second Vatican Council. He was made a Servant of God by Pope John Paul II in 1990 and Pope Benedict XVI declared Pius XII Venerable on 19 December 2009. The item “1950, Vatican, Pius XII. Beautiful Gold 100 Lire Coin. (5.19gm!) NGC MS-66″ is in sale since Monday, July 13, 2020. This item is in the category “Coins & Paper Money\Coins\ World\Gold”. The seller is “coinworldtv” and is located in Wien. This item can be shipped worldwide.