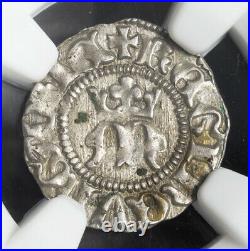 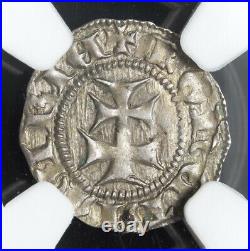 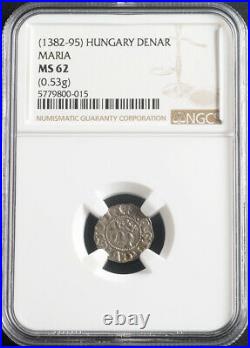 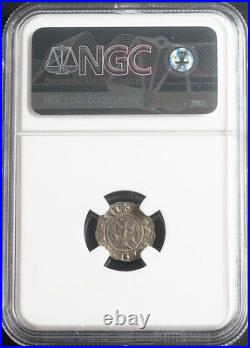 1395, Kingdom of Hungary, Maria Anjou. Beautiful Silver Denar Coin. Denomination: Denar Reference: Huszar 566. Certified and graded by NGC as MS-62! Diameter: 16mm Weight: 0.53gm Material: Silver. Obverse: Crown above initial (M), flanked by lis symbols. Legend: + REGINE VNGARIE Reverse: Patriarchal cross within inner circle. Legend: + MONETA MARIE. Maria of Hungary c. 1257 25 March 1323 of the Árpád dynasty was Queen consort of Kingdom of Naples. She was a daughter of Stephen V of Hungary and his wife Elizabeth the Cuman. Maria’s mother followed the Shamanist religion, like other Cumans. She was considered a Pagan by contemporary Christians of Europe. Elizabeth had to convert to the Roman Catholic faith in order to marry Maria’s father, Stephen. Maria was the second of six children. Her sisters Elizabeth and Catherine both became Queen of Serbia. Another sister, Anna married Andronikos II Palaiologos. Maria’s only brother was Ladislaus IV of Hungary. Her paternal grandparents were Béla IV of Hungary and his wife Maria Laskarina. Her maternal grandparents were Köten, leader of a tribe of Cumans, his wife was Mstislawna, a Russian noblewomen who may have royal connections. In 1270 when Maria was only twelve years of age, she married the future Charles II of Naples (12541309), the eldest son and heir of Charles I of Sicily and his wife Beatrice of Provence. On the 10 July 1290, Maria’s brother, Ladislaus IV of Hungary died childless. The question now was who would succeed him? He had four sisters, three of them outlived him, all four had married powerful rulers and had had their own children. On the 21 September 1290, Maria claimed the throne of Hungary. She was up against her two sisters: Catherine, Elisabeth and their children, plus the children of her younger sister Anna. Maria was crowned Queen by a Papal legate in Naples 1291, but transferred her rights to her eldest son, Charles Martel of Anjou. The Pope confirmed her sole rights in Hungary on the 30 August 1295. However, Catherine’s son, Stefan Vladislav II of Syrmia was still a dangerous rival for Maria and Charles Martel. In the end, Charles Martel gave his cousin Slavonia as a compromise. Charles Martel was only titular King of Hungary, it was Maria’s grandson who became King, Charles I of Hungary. Ultimately the claims of the sisters Mary and Catherine were united in a common descendant when the pair’s great-great-granddaughter, Mary of Hungary, ascended to the Hungarian throne in 1382. During 1290, Maria’s sister Elisabeth fled from Bohemia with her son because her husband had lost favour and was executed, Maria allowed Elisabeth and her son to stay in Naples with her, before she became a nun, but escaped and remarried to Stefan Uro II Milutin of Serbia (brother of Catherine’s husband) Elizabeth’s stay in Naples is documented during July 1300. Maria’s husband died in August 1309, Maria was now a widow. She lived in Naples for the rest of her life, where she died on 25 March 1323, she was buried in Naples at the Santa Maria Donna Regina. The item “1395, Kingdom of Hungary, Maria Anjou. Beautiful Silver Denar Coin. NGC MS-62″ is in sale since Thursday, April 29, 2021. This item is in the category “Coins & Paper Money\Coins\ World\Europe\Hungary”. The seller is “coinworldtv” and is located in Wien. This item can be shipped worldwide.